ABS-CBN’s Film Restoration Project, in partnership with Powerplant Cinemas, ones again exhibits some of the country’s most well-loved classic films in “REELive the Classics” this December, including the Peque Gallaga and Lore Reyes-directed fantasy-adventure film “Magic Temple,” which is celebrating its 20th anniversary this year. 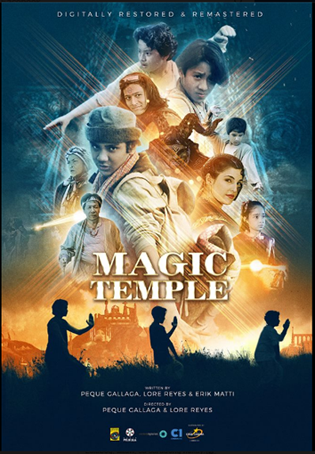 “We are very happy that we have another tie-up with Rockwell for ‘REELive the Classics,’ our second for 2016. The audience support has steadily grown over the last couple of years and it is heart-warming to hear that even the millennials are once again familiar with the likes of Brocka, Bernal, Romero, de Leon, and the other greats. If only for that, we have succeeded in making the works and the creators endure for the next generation,” said the head of Film Restoration, Leo Katigbak.

The digitally restored and re-mastered version of “Magic Temple,” which premiered in 1996, revolves around the story of young boys Jubal (Jason Salcedo), Sambag (Junell Hernando), and Omar (Marc Solis), who were destined to save their world, Samadi against the treacherous and powerful sorceress.

Aside from the said movie, making their way back to the big screen are “Cain at Abel” and “Insiang,” both directed by revered director Lino Brocka. The 1976 award-winning film “Tatlong Taong Walang Diyos,” which gives a glimpse of the Japanese occupation in the Philippines, will also be shown in “REELive the Classics.” 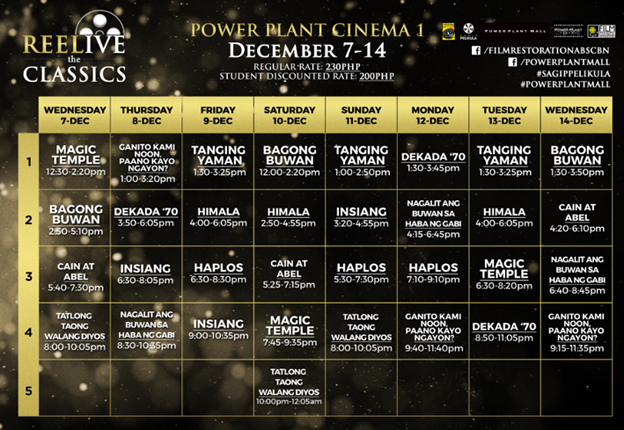 The festival will run from December 7 to December 14 at the Rockwell Power Plant Mall. Tickets cost P230, with a discounted rate of P200 for students.

“REELive the Classics” is part of ABS-CBN Film Restoration campaign dubbed as “Sagip Pelikula,” which aims to locally restore classic films and make it available to the general public via different platforms.

To date, ABS-CBN Film Archives has already restored over 120 films since it started in 2011, some of which were already screened internationally via film fests, screened locally via red carpet premieres, aired on free-to-air and cable television, viewed via pay-per-view and video-on-demand, distributed on DVD, and downloadable even on iTunes.