Following the success of Ikaw Lang Ang Mamahalin, GMA-7 recreates another one of its very own masterpieces with the upcoming remake of Sana Ay Ikaw Na Nga. The original version ran for two successful years, and still remains as one of GMA’s most popular teledramas to this day. 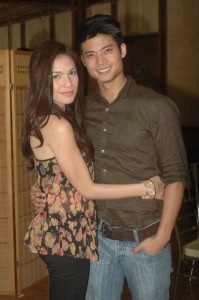 “Sana Ay Ikaw Na Nga became very popular when it first aired 10 years ago at time when viewers were starting to notice GMA’s primetime offerings.  The show opened many doors for its original lead stars, and we’re hoping that the new version will do the same for Mikael and Andrea,” says SAINN program manager Hazel Abonita.

His first major break as an actor came when he landed the role of Lumad, one of Marian Rivera’s love interests in the epicserye Amaya. He later appeared in the primetime series My Beloved, where he first had the opportunity of working with his new leading lady, Andrea.  The two never had scenes together, but everyone, back then, kept teasing Mikael and Andrea to each other. Unknown to both, they will end up as a pair in this GMA afternoon drama.

In the 2012 version of SAINN, Mikael will take on the role of Carlos Miguel Altamonte (originally portrayed by Dingdong).

Meanwhile, Andrea first appeared on television via the former youth oriented show Ka-Blog on GMA. She was later cast in other Kapuso shows including Spooky Nights, Blusang Itim, and My Beloved.

She also starred in movies like Shake Rattle and Roll and You To Me Are Everything. She is taking up Communication Arts at the University of Sto. Tomas.

Andrea will reprise the role of Cecilia Fulgencio (played in the original version by Tanya). She will play both the real and fake Cecilia after her character figured in a bombing incident in the story.

Completing the cast are bc

SAINN is directed by Roderick Lindayag and written by RJ Nuevas, whose concept gave birth to the original SAINN.