The ABS-CBN Philharmonic Orchestra will play well-loved movie scores of legendary composer John Williams in its first solo concert on September 2, 6 PM at the Meralco Theater. 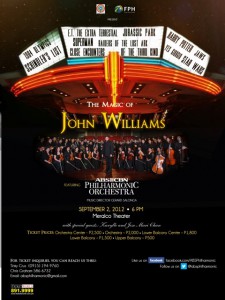 ,” the concert will celebrate the composer’s 80th birthday and will feature most of his contribution to film music in the six decades of his career.  From the adventurous bicycle chase in “E.T.” to the thrilling sea hunt in “Jaws,” the haunting melodies of “Schindler’s List” and the romantic flying scene in “Superman,” Williams helped immortalize these scenes through the sweeping grandeur and tender emotions of his music.

The members of the orchestra, as well as its Music Director and Conductor Gerard Salonga, are all big fans of Williams, who has surpassed greatness because of his music. “Everyone’s always excited to start with the rehearsals for the concert,” Salonga shared. “We bought the musical pieces from the US exclusively for this show; these pieces are authentic works of John Williams,” said Salonga.

Other movie scores in the repertoire include themes from “Jurassic Park,” “Raiders of the Lost Ark,” “Close Encounters of the Third Kind,” “Harry Potter,” “Yes Giorgio,” plus the 1984 Olympics Anthem.

Guest performers are Karylle and Jose Mari Chan. The Philippine Outpost 501st,an international organization of Star Wars fans who wear costumes from the movie, will also serve as an added attraction.