National Telecommunications Commission (NTC) issues cease and desist order against Sky Cable’s Direct Broadcast Satellite Service despite over a thousand new COVID positive recorded today. The DOH has also reported that there were 277 new recoveries, and 11 new deaths today due to COVID-19, bringing the total number to 10,233 and 1,266 respectively. 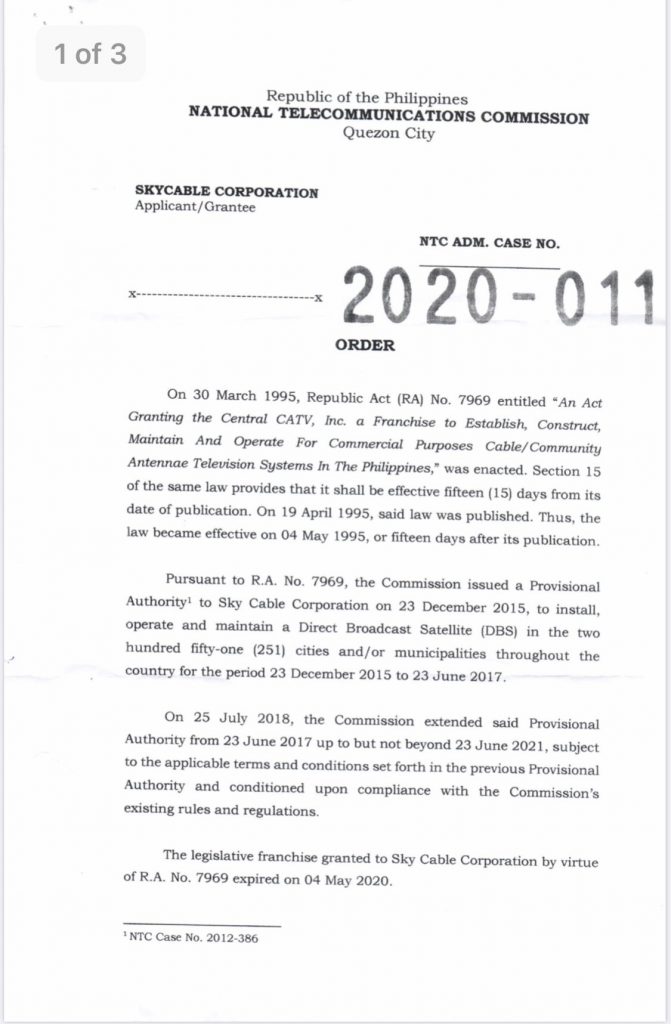 This is a slightly technical matter but I will explain it as simply as I can.

Many people have asked me how ABS-CBN is able to continue broadcasting its channels on TV Plus. It is because these channels are airing through a frequency whose franchise has not expired, is not covered by the Ch2 cease and desist order, and is not owned by ABS-CBN. That is Channel 43, which is assigned to AMCARA Corp. It is not owned and is not part of ABS-CBN.

ABS-CBN buys airtime from AMCARA in order to continue airing its TV Plus channels. It’s the same type of arrangement called “blocktime” between Eat Bulaga and GMA. Eat Bulaga is produced by TAPE, Inc and not GMA/Channel 7. TAPE is a “block timer” of GMA-7. Similarly, ABS-CBN as a producer of shows is a blocktimer of AMCARA. I need to point out that producing a show and broadcasting are two different activities. The former doesn’t require a franchise. Anyone can produce a show and buy airtime from a broadcaster that has a franchise to broadcast.

Sometime last year, President Rodrigo Duterte issued a statement addressing ABSCBN that he will see to it that you are out.