I was following the ticket sales of Phyto Science Production of Alden Richards concert when it was announced earlier this year but for some reason I lost track of it. The Concert dubbed as ‘Sa Totoong buhay Naman‘ was originally slated on January 16, 2016 but later moved to February 20, 2016 at the Philippine Arena which has a 55,000 seating capacity. 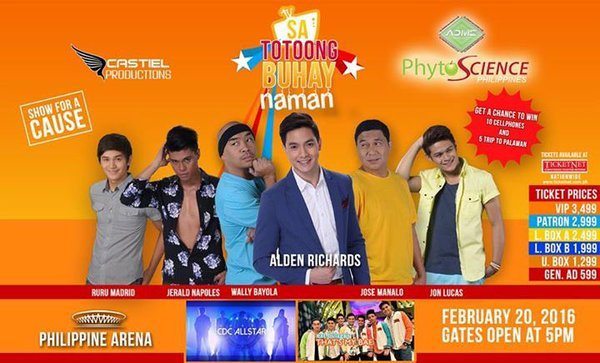 Philippine Arena was the same Venue when Eat bulaga staged the Tamang Panahon saturday special. Here is the Teaser of the supposedly CONCERT of Eat Bulaga’s Bae:

This Alden Richards concert was also the date of James Reid and Nadine Lustre concert last night at the Araneta Coliseum. The venue turned pinkish-maroon ocean as fans went on with their light sticks upon entrance. This is the second time a Philippine concert venue was filled with FULL bright lights on a dim exposure. The first one was during Sarah Geronimo concert last year.

JaDine concert is now one of the most successful PAID events to date in the history of loveteam produced concert. Photo from Eric John Salut. 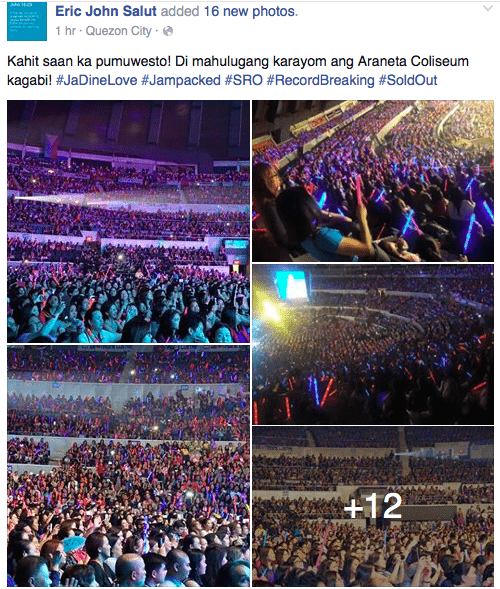 According to Philippine Daily inquirer in a similar article about the cancelled Alden Richards concert and I quote, the cancellation “the producer’s decision and that only 74 tickets were sold.”

There were rumors and writeups from broadsheets that Alden Richards concert in various location as such as Dubai and Doha were not received favourably in terms of ticket sales.