Primetime princess Kathryn Bernardo is deeply touched with the viewers’ unwavering support to their top-rating ‘royal teleserye’ in ABS-CBN, “Princess and I.”

“To everyone who watches our show every night, thank you so much for the support. Our ratings gets higher and higher because of you,” Kathryn said. “And it is also because of you that we keep on making ‘Princess and I’ more entertaining.” 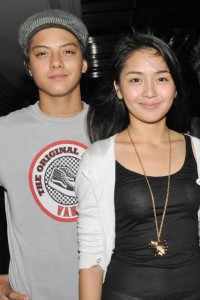 “Princess and I” recently reigned its timeslot and once more became the second most-watched TV program in the country. Based on the latest data of Kantar Media last Wednesday (August 29) the drama series topbilled by Kathryn, Gretchen Barreto, Albert Martinez, Enrique Gil, Khalil Ramos, and Daniel Padilla garnered 38.2% national TV ratings, or more than 21 points higher than its rival show in GMA “24 Oras” which only got 16.9%.

Don’t miss Mikay’s much-awaited coronation in “Princess and I” weeknights after “TV Patrol” on Primetime Bida. For more updates, log on towww.abs-cbn.com or follow @abscbndotcom on Twitter.