by rodmagaru 8 years ago7 years ago

Eight Official entries for the Metro Manila Film Festival 2012. Brillante Mendoza film didnt made it to the list, Shake Rattle 14 and Enteng IN!

The official EIGHT (8) MMFF ENTRIES are the following:

2. “THY WOMB” replaced “MGA KUWENTO NI LOLA BASYANG” (twinbill fantasy) of Unitel Productions after it officially backed out/ withdrew from the Festival, even if it was at the height of shooting. Directors: Chris Martinez and Jerrold Tarog.

3. The followiing did not make it to the MAGIC 8: 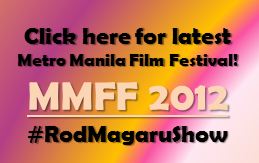