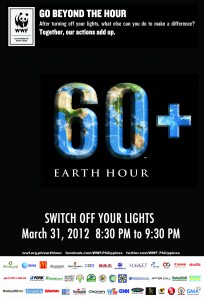 Annually, We always look forward to EARTH HOUR, the global 60-minute switch-off of lights from different place of the earth. This Year, The event will extend to the International Space Station, where Earth Hour Astronaut-Ambassador Andre Kuipers shall stand vigil over our imperiled planet as the lights switch off on 31 March, sharing photos and live commentary.

The EARTH HOUR Presscon was held yesterday at Hotel Intercon with WWF Marc Nelson and Rovilson Fernandez as hosts.

From Angola to Zimbabwe, organizing teams from the World Wide Fund for Nature (WWF) and its growing roster of allies are preparing for what is hoped to be the largest environmental celebration in human history.

Earth Hour founder and Executive Director Andy Ridley says everyone from citizens to businesses, school children to world leaders, need to believe they can make a difference. “The state of our planet affects each and every one of us,” says Ridley. “Last year Earth Hour reached 1.8 billion people across the planet. This year through digital media we are offering a greater opportunity to connect people with the desire to take much needed action for the environment.”
SIMULTANEOUS KICK OFF AT MAKATI, CEBU and DAVAO.

WWF-led switch-off ceremonies are slated for the cities of Makati, Cebu and Davao– though other cities and towns are expected to hold well-organized events to observe the switch-off.

Makati City’s Ayala Triangle Gardens shall be the central hub forLuzon. At 6:30 PMon 31 March, glow-in-the-dark dance troupe Bailes de Luces and the Caracol dancers shall form the vanguard of an Earth-themed parade which starts at theMakatifire station and ends at Ayala Tower One – where WWF-Philippines National Ambassador Rovilson Fernandez shall host a programme with performances from El Gamma Penumbra, Brigada and other groups. No less than Earth Hour founder Andy Ridley shall lead the country’s main switch-off event, hosted by WWF with the help ofAyalaLandand the Makati City Government.

CebuCity’s Plaza Independencia shall be the chief switch-off site for the Visayas. A festive street parade led by local Sinulog Dancers shall start fromFuente Osmeña Circlefrom5:30 PMonwards. TheCebuswitch-off further features a candle lighting ceremony capped off by the release of biodegradable sky lanterns.Cebu’s event is in cooperation with the Aboitiz Group and the Cebu City Government.

SM Davao shall be the main switch-off site forMindanao. WWF-PhilippinesNational Ambassador Marc Nelson shall host the switch-off, which features a tribal-themed parade around SM Davao at 6:30 PM. Black-light and fire-dancers shall woo the crowd with specialized routines once the city plunges into darkness. TheDavaoevent is in collaboration with SM Supermalls, the Green Alliance and the Davao City Government.

Earth Hour Philippines National Director Atty. Gia Ibay shares, “We’re extremely excited for this year’s switch-off ceremonies. Though the Visayas andMindanaohave always observed their own unique switch-off ceremonies, WWF has traditionally celebrated Earth Hour fromManila. To commemorate our country’s fifth Earth Hour, we thought it high time for WWF to observe the movement across the archipelago – which has always been what we’ve aimed for.”

I WILL IF YOU WILL CAMPAIGN

Earth Hour 2012’s new ‘I Will If You Will’ handle empowers people to share a personal dare with the world by asking everyone what are you willing to do to save the planet?

The concept of ‘I Will If You Will’ centers around providing a social contract between two parties – connecting one person, business or organization to a ‘promise’ and their friends, family, customers or members to a ‘challenge’ – uniting them behind the common goal of creating a positive environmental outcome.

The campaign has taken hold and ‘I Will If You Will’ pledges are now snowballing across cyberspace.

WWF-Philippines National Ambassador Marc Nelson has pledged to swim with sharks – in a Panda costume – and plant trees underwater while munching on a carrot, if 5000 of his Twitter followers pledge to avoid plastic and reuse shopping bags.

WWF-Philippines National Ambassador Rovilson Fernandez, for his part, has pledged to run races clad in a Panda costume until April if 5000 of WWF-Philippines’ 23,000 fans opt to use stairs over elevators for a full month.

What is Your I Will If You will TWEET? Also put a hashtag #EARTHHOUR and #IWIYW