Pinoy Halloween has never been this exciting this October in WarnerMedia. From horror to comedy, kids content to action-packed shows, WarnerMedia channels and apps have them all this October! Halloween starts early with horror movies and series on Warner TV, while three brand-new series premiere on HBO GO – a crime-solving female detective, a family comes undone after a violent death, and a martial arts warrior in San Francisco’s Chinatown.

Stream or download three new series on HBO GO this October. A brand-new HBO Asia Original series Miss S will premiere on Monday, 5 October exclusively on HBO GO. This Mandarin adaptation of the globally popular Miss Fisher’s Murder Mysteries stars Ma Yili as a beautiful and witty socialite who forms an unlikely crime-solving duo with the righteous and serious inspector played by Vengo Gao Weiguang. Onto another power couple, Nicole Kidman stars alongside Hugh Grant as a married couple living perfect lives until a violent death lead to a chain of terrible revelations in the HBO Original series The Undoing which premieres same time as the U.S. on Monday, 26 October at 9am on HBO GO and HBO. Warrior, the action-packed series based on the writings of martial arts legend Bruce Lee, is back for Season 2. Premiering same time as the U.S. on Saturday 3 October at 10am on HBO GO and Cinemax, Andrew Koji stars as a martial arts prodigy who becomes a hatchet man for the most powerful tong in 19th century San Francisco’s Chinatown.

Ben Tennyson is back to face the biggest fight of his life as he takes on his archenemy, Vilgax, in Ben 10 Vs. The Universe: The Movie, which premieres on 10 October at 10am on Cartoon Network, Boomerang, HBO GO, HBO, HBO Family and Warner TV. Looking for more new movies to watch? A new blockbuster movie premieres every Saturday at 9pm on HBO GO and HBO. Titles to look out for in October include Playing with Fire which premieres on 3 October and stars John Cena and Keegan-Michael Key as rugged firefighters who meet their match when they attempt to babysit three rambunctious kids, and Downton Abbey premiering on 10 October. Follow the beloved Crawley family and their staff as they prepare for a royal visit. From a royal visit to discovering what it means to be a modern princess, join Barbie in Barbie Princess Adventure on Saturday, 25 October at 11am on Boomerang.

Up for some horror movies this October? Doctor Sleep, based on a novel of the same name by Stephen King, premieres on 31 October at 9pm on HBO GO and HBO. Starring Ewan Mcgregor and Rebecca Ferguson, the film is the next chapter of the horror film, The Shining. To help you get into the mood for Halloween, Warner TV has curated horror-themed movies that air every Saturday in October at 9pm. Titles include Constantine, Annabelle: Creation and IT. If you like superheros and horror, Warner TV has the series just for you. Swamp Thing a mysterious creature emerges from the murky marsh Based on the DC Comics character of the same name premieres on 7 October at 9.30pm on Warner TV.

Playing with Fire – Premieres Saturday, 3 October at 9pm on HBO GO and HBO.
When straight-laced fire superintendent Jake Carson and his elite team of firefighters come to the rescue of three siblings, they quickly realise that no amount of training could prepare them for their most challenging job yet – babysitting. As their lives, jobs and depot get turned upside down, the three men soon learn that children – much like fires – are wild and unpredictable. Stars John Cena and Keegan-Michael Key.

My Little Pony: Pony Life Brand New Show – New episodes air on weekends at 10.30am from 3 October on Boomerang.
My Little Pony: Pony Life is the newest iteration in the beloved My Little Pony franchise. The heart-warming series is set in the magical location of Sugarcube Corner, which has become the ponies’ home away from home. It’s here that Pinkie Pie serves up frosted cupcakes to the best customers in the world— her friends! The series is loaded with magic, including a mysterious source of potions that Pinkie keeps hidden behind the bakery counter and breaks out when the need arises.

Warrior Season 2 – Premieres Saturday, 3 October at 10am on HBO GO and CINEMAX with a primetime encore at 10pm on CINEMAX. A new episode premieres at the same time weekly. 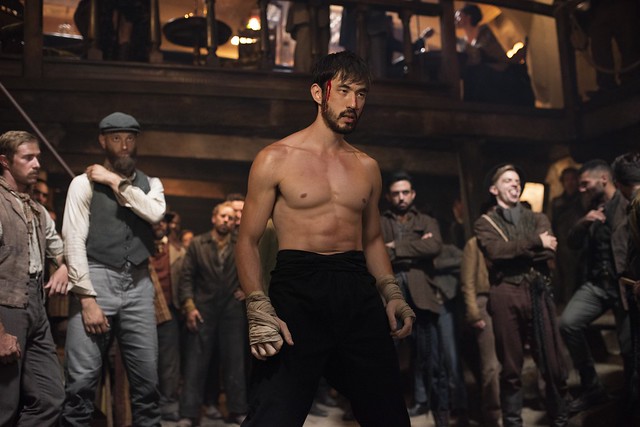 Based on the writings of martial arts legend Bruce Lee, this gritty, action-packed series is set during the brutal Tong Wars of San Francisco’s Chinatown in the late 19th century. The series follows Ah Sahm (Andrew Koji), a martial arts prodigy who emigrates from China to San Francisco under mysterious circumstances. Ah Sahm becomes a hatchet man for one of Chinatown’s most powerful Tongs (Chinese organized crime family). Season two follows rival Chinatown Tongs as they fight for dominance amidst the growing anti-Chinese fervor that threatens to destroy them all.

Swamp Thing – Premieres Wednesday, 7 October at 9.50pm on Warner TV.
Swamp Thing follows Dr. Abby Arcane as she investigates what seems to be a deadly swamp-born virus in a small town in Louisiana but when a mysterious creature emerges from the murky marsh, she finds herself facing the nightmares of a supernatural world where no one is safe. Based on the DC Comics character of the same name, the series stars Crystal Reed, Andy Bean and Derek Mears.

Ben 10 Vs. The Universe: The Movie – Global premiere on Saturday, 10 October at 10am on Cartoon Network, Boomerang, HBO GO, HBO, HBO Family and Warner TV. Encore at 2.30pm and 7pm.
Join Ben for the highest stakes adventure ever, blasting into outer space while the fate of the galaxy hangs in the balance! When a blast from Ben’s past – Vilgax – returns to do double the damage on Team Tennyson and planet Earth itself, Ben must go interstellar to save the day while Gwen and Grandpa Max team-up with Kevin to protect the world in Ben’s absence, but when our boy hero is confused for the villain in space, Ben is forced to defend himself in the trial of a century! 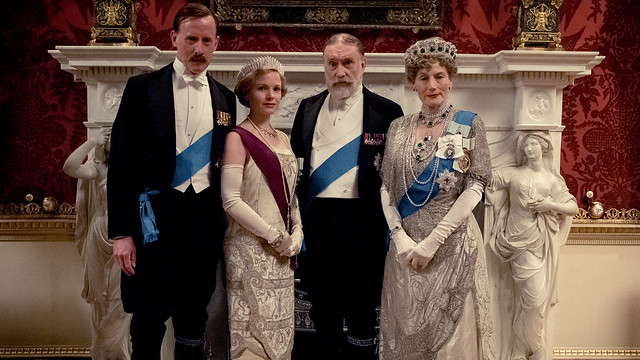 The worldwide phenomenon becomes a grand motion picture event, as the beloved Crawleys and their intrepid staff prepare for the most important moment of their lives. A royal visit from the King and Queen of England will unleash scandal, romance and intrigue that will leave the future of Downton hanging in the balance. Written by series creator Julian Fellowes and starring the original cast, including Maggie Smith and Michelle Dockery.

Barbie Princess Adventure – Premieres Saturday, 25 October at 11am on Boomerang.
Barbie Princess Adventure is a brand-new movie length spectacle featuring Barbie and all her wonderful friends. In the feature film, Barbie discovers what it means to be a modern princess when she switches places with her royal doppelganger. Barbie helps the young monarch find her voice and use her position for positive social change. With heartwarming musical numbers and all the charm and love Barbie has to offer, this movie is sure to bring all the feels.

The Undoing – Premieres Monday, 26 October at 9am on HBO GO and HBO with a primetime encore at 10pm on HBO. A new episode premieres weekly.
The HBO Original limited series follows Grace and Jonathan Fraser, who are living the only lives they ever wanted for themselves. Overnight, a chasm opens in their lives: a violent death and a chain of terrible revelations. Left behind in the wake of a spreading and very public disaster and horrified by the ways in which she has failed to heed her own advice, Grace must dismantle one life and create another for her child and her family. Stars Emmy® and Academy Award and Golden Globe-winner Nicole Kidman and Emmy® nominee Hugh Grant.

Doctor Sleep -Premieres Saturday, 31 October at 9pm on HBO GO and HBO.
The supernatural thriller is based upon the novel by Stephen King and continues the story of Danny Torrance, 40 years after his terrifying stay at the Overlook Hotel in The Shining. A now-adult Dan Torrance, played by Ewan McGregor, meets a young girl with similar powers as he tries to protect her from a cult known as The True Knot who prey on children with powers to remain immortal. 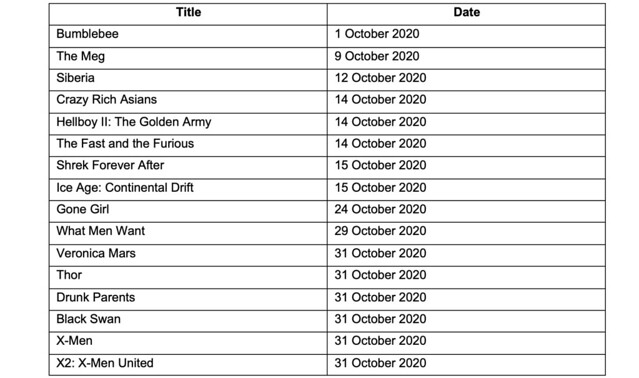 Channel numbers for your reference:

Download the HBO GO app now at App Store or Play Store and get a 7-day free trial. Access HBO GO via Cignal or at https://www.hbogoasia.com/. Download the app from App Store or Play Store on your device and enjoy a 7-day free trial.  HBO GO can now be accessed via Android TV, Apple TV, LG TV and Samsung Smart TV – and comes with AirPlay and Google Cast functionality.