My favorite Globe Studios is back with their first ever narrative digital series that is surely going to bring all the “kilig” and laughter in a refreshingly unique way with Gaya sa Pelikula (Like in The Movies). To be perfectly honest, I didn’t read the wattpad version even if its already popular online because I already knew that the adaptation is in the works. I’d love to see the whole thing through a motion picture as I tend to “over-interpret” the fiction I read differently haha. I am weird I know.

Filmed during the quarantine, Gaya Sa Pelikula is a love letter for and from the community in how it freely presents queer love, all its feelings, and all its possibilities that can lead to a most-deserved happy ending. Without exoticizing queer love, the story is presented in the most normal way possible. For the LGBTQIA+ community, Gaya Sa Pelikula proudly banners – “It’s time to take back our story.”

The romantic comedy series tells us about Karl, a 19-year-old introverted architecture student in the middle of an identity crisis and Vlad, a schoolmate on the run from his own family. As their lives become entwined by fate, they become housemates over the semestral break where Karl and Vlad come to learn more about each other and about themselves than they could have ever imagined.

Gaya sa Pelikula is an 8-part 20-minute series that is a prequel to the unproduced teleplays on Wattpad by Severo. It will premiere on Globe Studios’ official YouTube channel starting on September 25 with up and coming actors Paolo Pangilinan and Ian Pangilinan taking on the lead roles of Karl and Vlad, respectively. 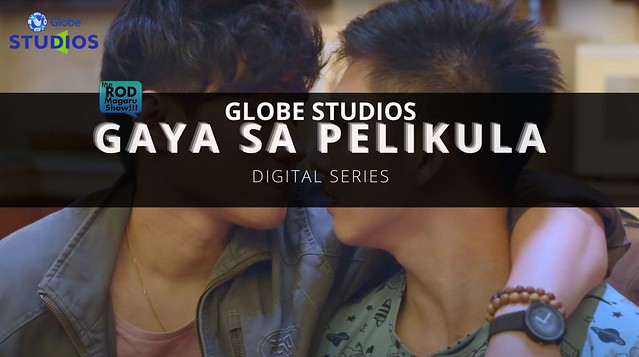 I personally didn’t watch the full trailer too so I don’t get to pre-empt myself from what’s coming. I do this all the time and it really helped me from my previous movie/series reviews to interpret it without the need to look at what they want us to see. But that’s just me.

During the online press launch awhile ago, Director JP Habac shared that they wanted to show challenges of LGBT community.

‘Gaya sa Pelikula’ was also chosen to be part of YouTube’s Super Stream content line-up. Super Stream is an effort of YouTube to enable Filipino viewers to access partners’ content such as movies, TV shows and more for free for a limited time.

Premiering this September 25, and every Friday thereafter,  make sure to subscribe to Globe Studios’ official YouTube channel so you won’t miss an episode up until November 13. Gaya Sa Pelikula is written and created by very talented Juan Miguel Severo and directed by ok my favorite too JP Habac.