Over 1,000 cable TV operators nationwide will be forced to close to the detriment of its subscribers, if the government disregards the existing executive order that allows them to operate without a franchise. 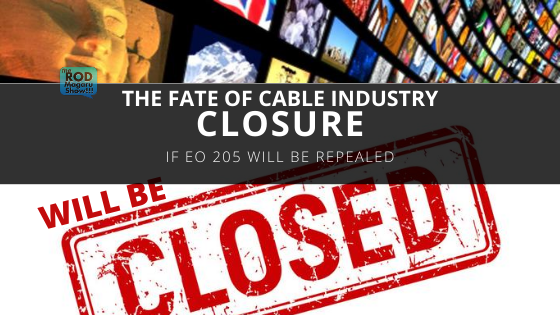 This was the reaction of a nationwide group of cable TV operators following reports that the National Telecommunications Commission has sought the guidance of Solicitor General Jose Calida on the validity of EO 205, which gives NTC the power to regulate the cable TV industry.

At the recent House panel hearings, Rep. Rodante Marcoleta threatened NTC commissioner Cordoba that he would be cited for contempt if he insisted on upholding the EO issued by former President Cory Aquino, which does not require cable TV operators to secure a franchise.

Marcoleta has questioned the continued operations of SKYcable and asked the NTC why it has not taken action against the company after its franchise lapsed.

In a TV interview, Philippine Cable Telecommunications Association (PCTA) president Joel Dabao warned that the subscribers will be at the losing end if such move will prosper.

Dabao said that instead of securing a franchise, they get a permit per area from and are regulated by the National Telecommunications Commission, adding that cable operators tap wired television to broadcast and not airwaves.

Over the weekend, social media went abuzz after clips from a Zoom meeting that involved congressmen who opposed ABS-CBN’s franchise renewal went viral.  In the meeting, Marcoleta revealed that Cordoba has sought the advice of Solicitor General Jose Calida on the matter.

Cordoba previously confirmed at the House Panel hearing on ABS-CBN’s franchise that cable TV operators were operating on the basis of the said order by Aquino.

Of the 1,000 cable operators nationwide, Dabao said that 300 of them are members of the PCTA.