First full livestream of #MYXAwards2020 on Twitter showcased the #PowerOfMusic.

Twitter partnered once again with MYX Philippines the number one music channel in the country, to bring back the power of Original Filipino Music (OPM) to every Filipinos’ home with its first-ever virtual celebration of the most-awaited #MYXAwards2020. The event, which went live on Twitter, garnered over 4 million Tweets globally. 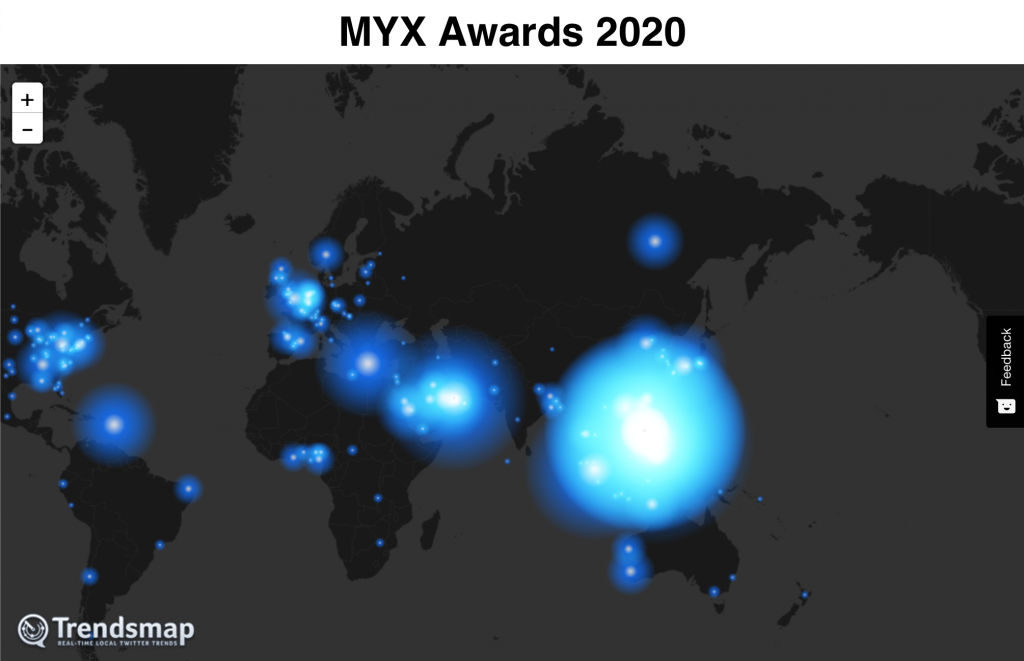 Last year, #TeamBahay joined in the celebration by watching the livestream of the red carpet event and getting real-time updates on Twitter. But since we are all encouraged to stay at home, MYX Philippines continued to recognize the outstanding achievements in the local music scene by doing a special livestream of the whole awards show for music fans to watch and enjoy safely at  home.

Prior to the event, fans and music enthusiasts were given a chance to cast their votes both on the website and Twitter by Liking or Retweeting official Tweets from MYX Philippines. Fans also showed their support by Tweeting their sentiments along with the official hashtag, #MYXAwards2020. Just like the previous years, the experience would not be complete without the exclusive Twitter emoji especially released for awards show.

IT’S HERE!! Make your tweet pop with the official MYX Awards 2020 emoji! 🤩🤩🤩 Join the conversation on Twitter and use the official hashtags:#MYXAwards2020#PowerOfMusic#MYX

Don’t forget to vote for your favorite nominees on https://t.co/5PACAe2HFD! pic.twitter.com/2GiEJVTLIc

#MYXAwards2020, the award ceremony’s official hashtag, dominated Twitter Philippine trends throughout the night. Constant streams of Tweets were about fans gushing about their favorites and showing that they were tuned in as every moment unfolded. Here are the top hashtags that made waves on the Twitter during the event live stream: 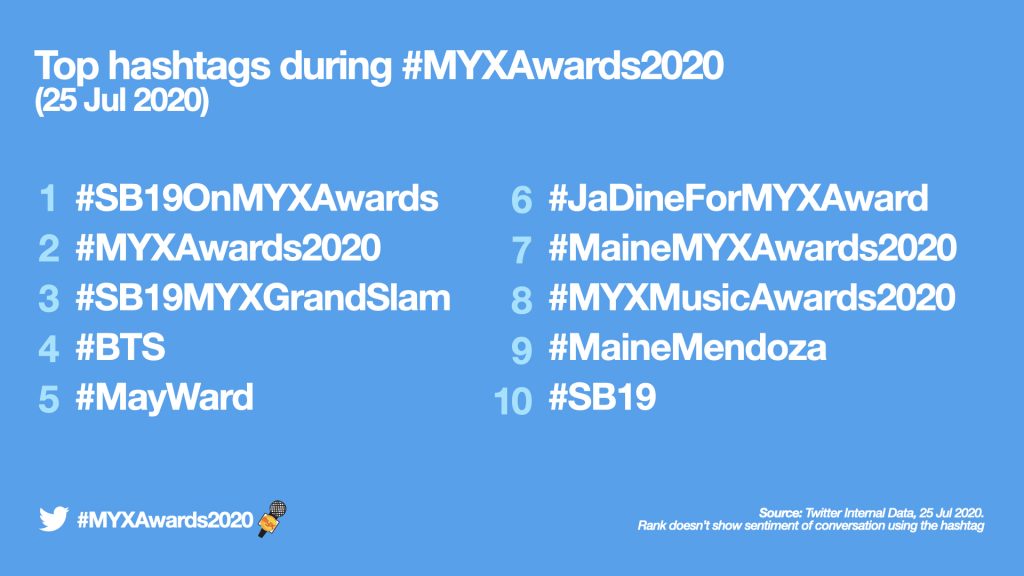 The event truly highlighted the best and brightest local acts and music, and here are the most mentioned artists at the #MYXAwards2020: 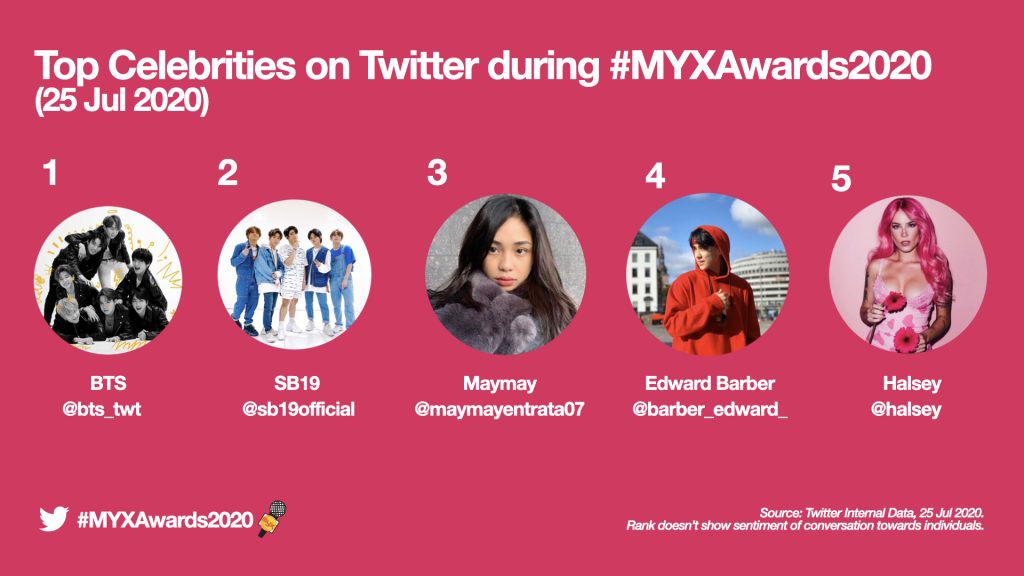 This Tweet featuring BTS and Halsey winning the International Video of the Year for “Boy With Luv” is the Most Retweeted Tweet of the night; showing the power of not just music, but the voice and contribution of fandoms in the industry.

Here are the other event highlights that sparked conversations on Twitter.

Congratulations to all #MYXAwards2020 winners! ICYMI, see how fans and the stars themselves celebrated it on Twitter 👇https://t.co/E2rMlvE82K

Sometimes, emoji speaks a thousand words. Aside from Twitter’s custom emoji for the awards show, fans also expressed their sentiments by using a variety of emojis. Here are the topmost used emojis during the event: 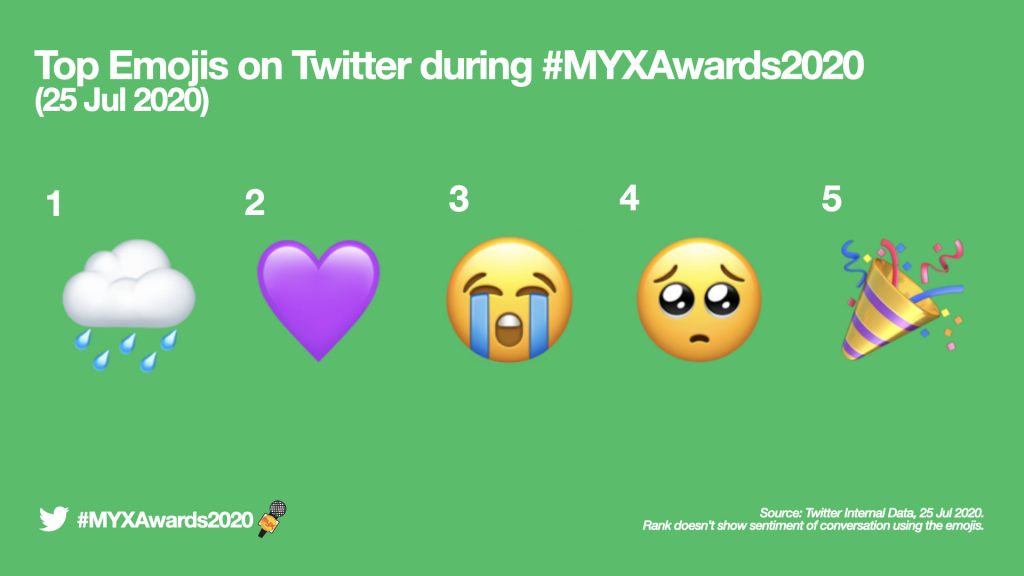 Stay updated with #WhatsHappening on the local music and entertainment scene. Check out the conversation that unfolded in this Twitter Moments, and let us know which are your favorites as well by Tweeting #MYXAwards2020 and tag us @TwitterPH.