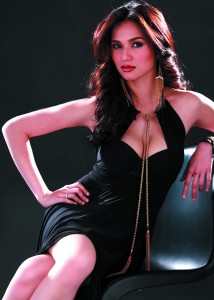 It’s so rare and refreshing when a young singer actress takes the high road. Now 25, the former ‘ultimate survivor’ of the first GMA’s Star Struck has released her latest offering, FOREVER BY YOUR SIDE—a proof that the singer returns with an album that is altogether different from anything she’s ever done before.

The six-track album kicks off with lead single “Hindi Ka Na Mag-iisa” with her stunning vocals in a perfect ballad composed by Arnie Mendaros. “Forever By Your Side” album hit the stores last July 23 and debuted at no. 4 of Astroplus’ sales chart after its first week. It is also available on www.mymusicstore.com.ph and iTunes for downloads.

Forever By Your Side was recorded in a concise period of time and Mercado shares her experience, “I have been comfortable working with PolyEast Records, in terms of recording and picking the best songs for the album… every song is dedicated to a certain level of experience and story to anyone who can relate.” Mercado now sounds like a maturing young woman following her own intuition and muse as she interpreted songs by such accomplished singer/songwriters as Wency Cornejo, Nyoy Volante, Francis Salazar, Gabby Alipe to name a few.

“I am very proud of this project because I was challenged with a much fresher sound—definitely new to my old brand of singing,” Mercado said. Album highlights include the title track and bouncy straight-forward pop Forever By Your Side, as interpreted in English by Wency Cornejo adapted from a Japanese song “Kizuna” (in English means “United”); Parang Kailan Lang and Ganun na Lang Ba soar into contemporary ballad treatment composed by Francis Salazar; Mercado’s personal favourite, Mahal na Mahal composed and arranged by Nyoy Volante; soulful and sweet number “Halik sa Hangin” composed by rock group Urbandub vocalist, Gabby Alipe.

“I actually started singing, not acting and my first love is music” Mercado confesses as she remembers her early days guesting as a singer at Café de Malate—the same bar where Kyla started out—where she was asked to do regular gigs when she was 17 years old.

However, Mercado has received more attention for her film work and hosting on TV but the new album released by PolyEast Records invites a closer look at her musical palette, which has broadened considerably since her bubblegum-flavoured debut, 2004’s Living The Dream—which was reported to have sold 30, 000 units.  She has also snagged two albums from GMA Records and Viva Records which have several popular singles such as “Sa Aking Panaginip,” “Moments Of Love” collaboration with Janno Gibbs, “Maybe This Time” and “Kahit Sandali.”

Her critically-acclaimed performance in a period movie, “Rosario” has made her one of Philippine’s most desirable actresses. Her TV appearances however includes soap operas like “Encantadia,” “Super Twins,” “SRO Cinemaserye: Suspetsa, Ikaw Sana” and “Sine Novela: Gumapang Ka Sa Lusak” among others. Mercado currently stars in another drama series on GMA 7 titled “Hindi Ka Na Mag-iisa” with co-stars Sid Lucero and Frank Magalona.

Mercado said that in the two years since she released her last album, “a lot” has happened in her life, which also will serve as inspiration for her new songs. She now feels it is time to begin the next chapter of her career by returning to her roots: singing.  She says, “Making this album has been the most creatively satisfying experience of my life.”

“I wanted to sing songs I have a real connection to. Songs that have moved me – made me think about loss and ultimately finding joy. Essentially, tell the story of what love really is – with all its pain and promise.” Mercado stated.

Watch out for the video for the first single, “Hindi Ka Na Mag-iisa” directed by award-winning music video director Treb Monteras. The album is now available in AstroVision, AstroPlus, SM Record Bars, Odyssey and Landmark released by PolyEast Records. You can also download songs from the album on www.MyMusicStore.com.ph and iTunes. For more information you may visit PolyEast Records website www.polyeastrecords.com or ‘Like’ us on Facebook and follow us on Twitter and Instagram.