“Peanuts”, the comic strip about Charlie Brown and his friends, is the mostly widely-read syndicated comic strip in history. I don’t know what to expect but I think I’m excited. Thank you to 9 Works Theatrical for bringing Charlie Brown into our stages!

This coming February 2012, 9 Works Theatrical, one of today’s most exciting theater companies, takes you back to those good ol’ days when baseball games, book reports, kite-flying and glee club rehearsals were all the craze as it brings to life the timeless characters from Charles M. Schulz’ popular comic strip “PEANUTS” via the Tony award-winning musical, YOU’RE A GOOD MAN, CHARLIE BROWN.

Charlie Brown can’t seem to win the heart of the elusive Little Red-Haired Girl, nor his friend Lucy, a bossy, crabby little tyrant who dispenses “Little Known Facts” and is convinced that she could be Queen someday. Lucy’s all-time crush is the sensitive piano-playing Schroeder who is an admirer of Beethoven. Meanwhile, Snoopy, Charlie Brown’s wise-cracking yet lovable dog, and Linus, Charlie Brown’s blanket-toting best friend, daydream all day as their friends battle with kites, school, and for Sally, Charlie Brown’s lil’ sis, getting a “D” in last week’s homework.

Told through a series of recognizable vignettes inspired by Schulz’s comic strips, the musical looks into an average day in the life of Charlie Brown and draws from the richness and universality of his everyday situations – making it the perfect family musical that will surely resonate with audiences young and old. 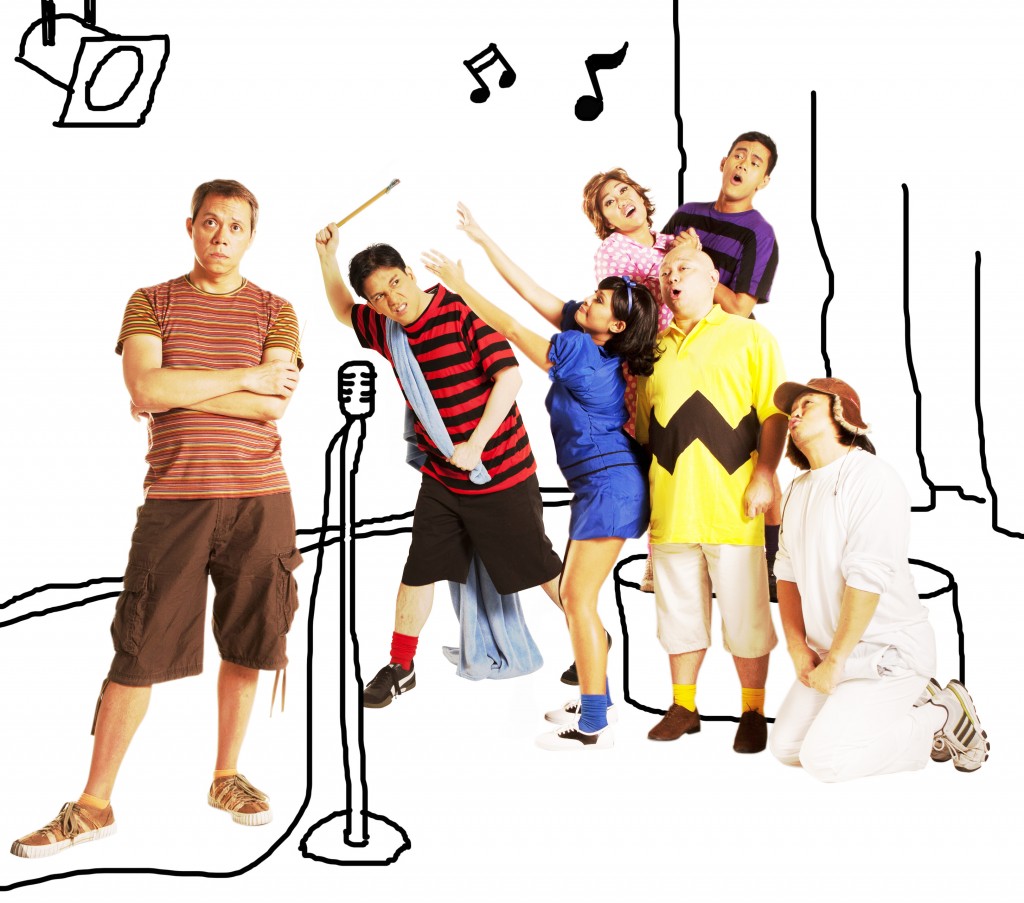 Playing the role of Charlie Brown is 9 Works Theatrical’s Artistic Director Robbie Guevara who was recently seen onstage as Uncle Max in THE SOUND OF MUSIC.

As an actor, he appeared in MISS SAIGON MANILA, Asian & UK Tour, MAN OF LA MANCHA, I LOVE YOU, YOU’RE PERFECT NOW CHANGE, SWEENEY TODD, BEAUTY AND THE BEAST, FOOTLOOSE, LITTLE SHOP OF HORRORS, and DISNEY”S CINDRELLA and MULAN, just to name a few. He is also an established director for the stage.

One of the country’s most versatile performing artists, Carla Guevara-Laforteza will be playing the role of the bossy and crabby Lucy. Carla was recently seen as Maureen Johnson in 9 Works Theatrical’s production of RENT, as well as having played the Sour Kangaroo in SEUSSICAL and Sister Berthe in THE SOUND OF MUSIC. Carla was also part of the MISS SAIGON London Cast 1995-1997 as Kim/Gigi understudy and has played lead roles in THE BAKER’S WIFE, TAMING OF THE SHREW, THE KING AND I, SOUTH PACIFIC, AVENUE Q, and SPELLING BEE, among many others. She is under the management of Johnny Manahan of Star Magic.

Playing the role of Charlie Brown’s lovable dog Snoopy is Lorenz Martinez whose last appearance onstage was as Benny in 9 Works Theatrical’s RENT, as well as Herr Zeller in SOUND OF MUSIC. Other acting credits include Rogers and Hammerstein’s CINDERELLA Asian Tour, HONG KONG DISNEYLAND, CAMELOT, JESUS CHRIST SUPERSTAR, BEAUTY AND THE BEAST, and the Netherlands production of MISS SAIGON, being the youngest to perform the role of the Engineer.

Appearing in his first 9 Works Theatrical musical is singer-actor and TV personality Franco Laurel who will be playing the role of the blanket-toting Linus. A former host of EEZY DANCING and KEEP ON DANCING, he has since found his true calling in theater, appearing as the younger brother of Rama in RAMA AT SITA, Ugly in Trumpets’ HONK, THE UGLY DUCKLING, and starring roles in ST. LOUIS LOVES DEM FILIPINOS, JOSEPH THE DREAMER, and Rep’s SWEENEY TODD, among others.

Returning to the stage after a very long acting sabbatical are veteran actors Tonipet Gaba and Sweet Plantado-Tiongson – who join Robbie, Carla, Franco and Lorenz in bringing to life this timeless classic.

Playing Charlie Brown’s younger sister Sally is Sweet Plantado-Tiongson who was the Musical Director for Vocals in 9 Works Theatrical’s SWEET CHARITY. Sweet is a performing-recording artist who is part of the Philippine premier vocal group, THE CompanY. Her stage credits include lead roles in THE LITTLE MERMAID, HONK! THE LION, THE WITCH AND THE WARDROBE, JOSEPH THE DREAMER, and N.O.A.H, among many others.

Also returning to the stage is 9 Works Theatrical’s Marketing and PR Director Toff de Venecia who was last seen as Hong/Yao in REP’s MULAN JR. His other acting credits include EMPEROR’S NEW CLOTHES as Mr. Sew and Disney’s ALADDIN JR. as Iago. He also appeared as Stripe in Ateneo Blue Repertory’s HOPE FOR THE FLOWERS, Pan in BATBOY and a Thespian in the Asian premiere of HIGH SCHOOL MUSICAL. He will be playing the role of Linus at certain performances.

For this production, 9 Works Theatrical has invited veteran actor Michael Williams to helm the show as its esteemed director. Michael has had numerous directorial credits with Repertory Philippines and other theater companies, which include SWEENEY TODD, PROPOSALS, JACK AND THE BEANSTALK, DEFENDING THE CAVEMAN, LOVE, LOSS, AND WHAT I WORE, and with his own theater company, Theater Down South. He is thrilled to be working with 9 Works Theatrical for the first time.

Based on the Comic Strip “Peanuts” by Charles M. Schulz, with Book, Music, and Lyrics by Charles Gesner, Additional Dialogue by Michael Mayer, Additional Music and Lyrics by Andrew Lippa, Original Direction by Michael Mayer, and originally produced in New York by Arthur Whitelaw and Gene Persson, YOU’RE A GOOD MAN, CHARLIE BROWN is an outrageously funny and heartwarming musical fit for the entire family and will keep audiences laughing at the edge of their seats.

A limited number of performances are NOW available for fundraising and block-buying. For tickets and other inquiries, please call 557-5860, 586-7105 or 0917-5545560 or email info@9workstheatrical.com for inquiries.

YOU’RE A GOOD MAN, CHARLIE BROWN is presented by 9 Works Theatrical, in cooperation with The Rockwell Club, Café Mediterranean, Make Up For Ever and its proud media partners – The Philippine Star, Business World, HerWord.Com, The Manila Bulletin, Sense&Style, Chalk Magazine, and Focus Media Audiovisuals.