At The Overlook Film Festival that celebrates all things horror, thriller/horror film Still/Born won the “Scariest Film” upon its world premiere. Directed by Brandon Christensen, Still/Born tells the story of the perfectly happy life of newlyweds Mary (Christie Burke) and Jack (Jesse Moss) until they lose one of their twins at childbirth. The plot thickens when Mary develops psychosis after learning of a demon, “Lamashtu” who preys on newborns and their mothers.

“The amount of attachment that happens between a parent and child is beyond anything I’ve ever imagined, and the thought of losing one is incomprehensible.” Christensen shares his thoughts about the concept, “So how does it feel when you lose one twin that you never met, but at the same time, still have the other one perfectly healthy?”

After the nominations at the British Columbia award program Leo Awards for “ Black Fly” (2014) and a role in “Twilight Saga: Breaking Dawn – Part 2” (2012), Christie Burke plays a phenomenal Mary as she depicts the depth of the mind of a mother stuck between two worlds. While four-time Leo-nominated and Best Male Lead in Canadian TV drama “Whistler,“ Jesse Moss captures the audience as he represents the perspective of a man who witnesses the love of his life become someone he can no longer trust. 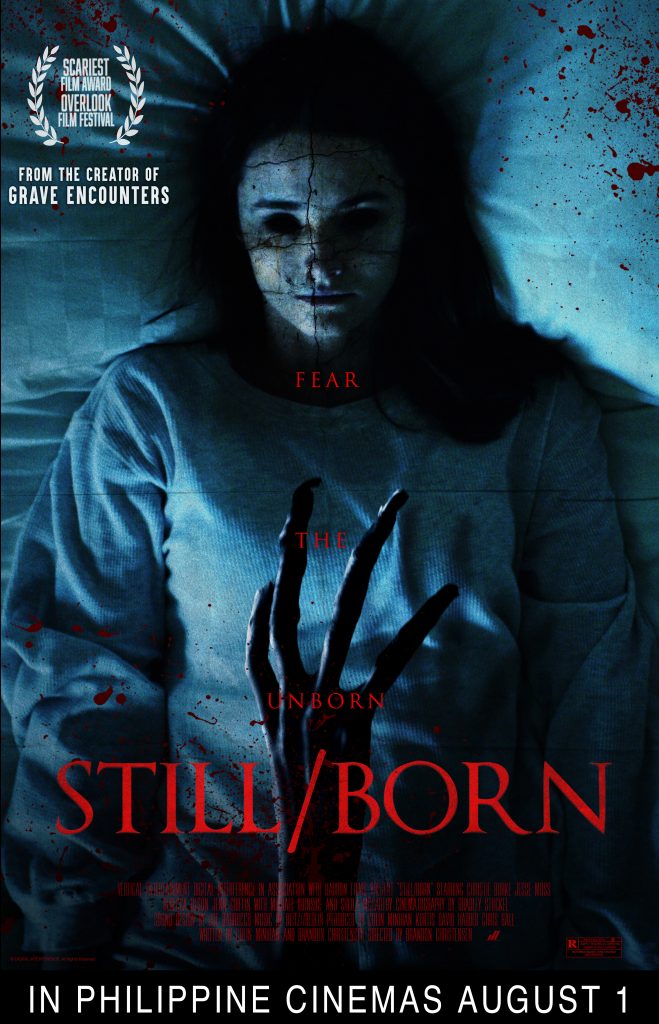 Also among the cast are Michael Ironside, Rebecca Olson, Sean Rogerson, and Grace Christensen. Written by Colin Minihan of The Vicious Brothers (Grave Encounters) and Brandon Christensen, Still/Born is rapidly becoming one of this year’s most compelling horror films. It debuted The Overlook Film Festival at horror’s most iconic hotel The Timberline Lodge and won SCARIEST FILM of the festival in 2017.

According to SLASHFILM, Still/Born “Elicited a genuine shriek from an audience member, a terrified, genuine cry of terror, the like of which I’ve never heard before during a screening.” while FRIGHTDAY reviews, “Hits terrifying notes, splitting its time between effective jump scares and chronic paranoia and dread.”

Still/Born is coming out in Philippine theaters on August 1, 2018, distributed by Cinescreen.