“Thank you very much for supporting ‘Princess and I’ every night. We are so grateful to everyone who loves us,” said Kathryn and Daniel who both believe that their fans were the ones who made all their accomplishments for the past year possible.

Since they were paired in the hit youth-oriented show “Growing Up” on September 2011, Kathryn and Daniel’s love team became a TV sensation that led them to a string of remarkable milestones in their respective showbiz careers including their top-rating primetime royal teleserye, being consistent trending topics in various social networking sites, well-attended mall shows, and their growing number of endorsements. 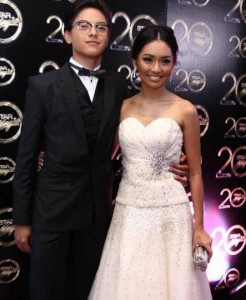 But prior their sensational success, Kathryn and Daniel confessed that they were both shocked that TV viewers got hooked with their tandem.

“I really thought our love team won’t work since we’re both moreno. It’s so unusual,” shared Kathryn. “That’s why it somehow became a challenge for us that made us exert effort for the viewers to appreciate our team-up.”

Daniel, meanwhile, admitted that Kathryn was his lucky charm for the past year. “I received a lot of blessings since Kath and I were teamed-up,” said Daniel who was recently given a platinum record award for his top-selling, self-titled debut album. “It seemed that every great thing in my career happened because I was with Kathryn.”

Although fans are clamoring for their idols’ special friendship to level up into a real romantic relationship, Kathryn clarified that they will just remain as a love team for now. “Let’s just wait and see,” she said. “I’m not allowed yet to enter into a serious relationship since we’re still both young.”

Meanwhile, the mystery of the long lost Yangdon princess is starting to be unraveled in the top-rating and trending ABS-CBN drama series, “Princess and I.” Will Ashi Behati (Gretchen Barretto) find the courage to tell the truth to King Anand (Albert Martinez) that she was the mastermind that put the life of Princess Ariyah/Mikay (Kathryn) in danger? How will Mikay accept that she and Princess Ariyah is one and the same person?

Don’t miss the bigger revelations in “Princess and I” weeknights after “TV Patrol” on Primetime Bida. For more updates, log on to www.abs-cbn.com or follow @abscbndotcom on Twitter.