Just two days ago, the German capital started getting caught up in almost 10 days of film high as the 70th Berlin International Film Festival or Berlinale unfolded.  The world’s largest international film festival draws over half a million attendees, including film professionals from over 130 countries.  It showcases 300 films across many categories. As the festival celebrated its glittering start in the Berlinale Palast, it is worth noting that a standout little gem from the Philippines can be found in the deluge of films that is sweeping the festival: it’s called Death of Nintendo.

No, it’s not really about the recent drop in Nintendo’s stock even with double-digit sales growth of its Switch game system; Death of Nintendo is actually a homage to puberty and adolescence with a pop touch.  Set in Manila in the early 1990s when Nintendo’s market leadership reached its peak, the film is a Filipino “coming-of-age dramedy in which four teenage friends go on a journey of self-discovery together as they try to one-up each other’s high scores and face life’s obstacles,” wrote Gabriele Niola of Screen Daily. 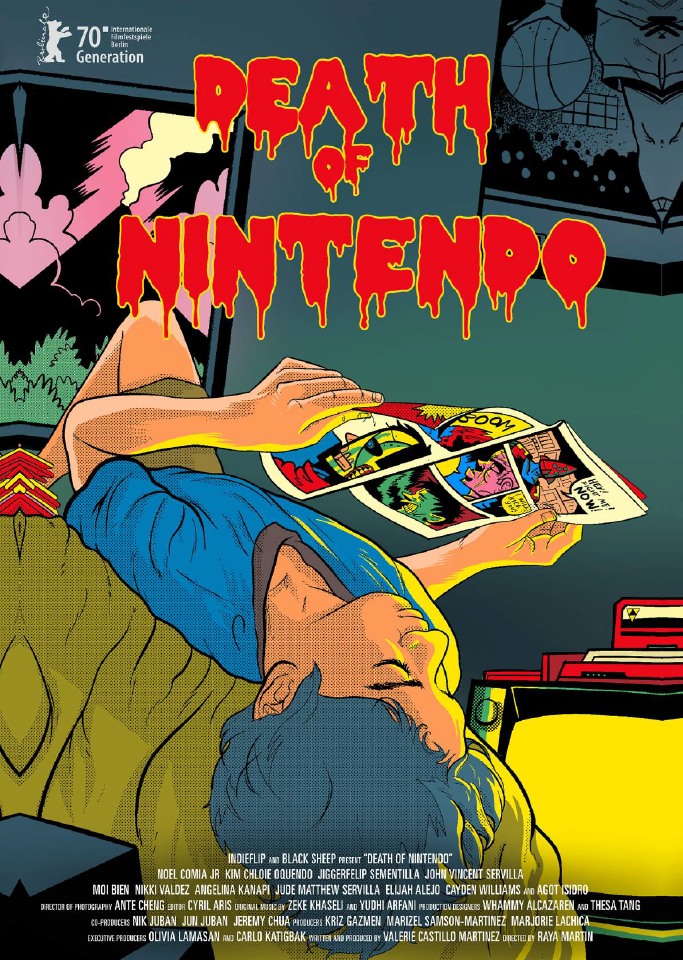 Death of Nintendo will have its world premiere in Berlinale at Urania on February 22, and will continue to screen in various theaters up to February 28. It is in the section of Generation, described by Berlinale as a “convention-breaking young people’s cinema”. Under Generation, it is in the competition programme of Generation Kplus, described by Berlinale as “screening state-of-the art international cinema… Coming-of-age stories: awesome, wild and angry, heartfelt and headstrong.”

The story takes us into the colorful pop-culture world of these four 13-year old friends, back in the days when video games were still a novelty in the Philippines. Tomboy Mimaw and her friends Paolo, Kachi and Gilligan live lives that revolve around Nintendo. Challenging their enjoyment is the climate-changing eruption of Mt. Pinatubo which is causing a series of earthquakes and nationwide blackouts, preventing the friends from engaging in their number one activity.  To add to the emotional melee, the friends begin to wrestle with new dilemmas – puppy love, circumcision and other teenage horror stories.  Will they all survive and grow up from these?

Death of Nintendo is a collaboration between two reconnected childhood friends that encapsulates their shared suburban childhood experience in the 90s. Valerie Castillo – Martinez, a Filipino-American writer and producer wrote the screenplay for this coming-of-age story loosely based on her own experiences growing up in the Philippines before moving to the United States. The earliest version was written while Martinez was completing a Master of Fine Arts program at Columbia University where it was awarded Faculty Honors in the university’s Screenwriting Competition in 2016.

She shares, “I was at a midpoint in my life. I’ve spent almost an equal amount of years living in the U.S. and the Philippines and I started fearing losing my childhood memories. It made me think of the simplest times I had growing up and summers in the Philippines. The 90s, in particular, were special.”

Not a stranger to film festivals, Martinez has had her other works screened in Venice, Toronto, Busan, and won multiple awards around the globe. That she gets to collaborate with childhood friend, schoolmate and acclaimed filmmaker Raya Martin, whose works include Independencia (2009), and Smaller and Smaller Circles (2017), is a noteworthy element in the process.

She explains, “Working with Raya has excited me in two different ways. The most important reason is our connection to the story, and how he deeply understood the nuances of all the cultural specificities of that place and time. Raya and I grew up in the same middle-class neighborhood and attended the same elementary school for 12 years. What’s more is that we wanted the Philippines to be depicted specifically to our experience and not be exoticized or serve certain cultural stereotypes involving extreme poverty or crime.”

For his part, Martin, who deviates from his usual filmmaking genre on Death of Nintendo, felt this was an important story to tell having grown up queer in the 90s. “Val and I had the exact same Catholic suburban-bred world being schoolmates. I also remember it was the beginning of the Internet aside from the console wars, so we were really fascinated between this virtual new world and touching ground that I felt was unmistakable in her story,” Martin shares.

While the first versions of the story focused on the boys, Martin and Martinez worked on developing an equally significant female character as a protagonist. “This feeling of inequality was essential to me. In fact, this time period had a lot of reckoning with the “boys club” mentality, just before our small suburban mindsets were forced to open up to a much bigger world,” he explains.