Twitter is the best place to find out #WhatsHappening on the latest news, culture, and entertainment. As the newest and top-trending Thai Boy Love show, 2gether: The Series, finally hit the Phillipine shores via iWant this June 28, Filipino fans fired up Twitterverse to express their thoughts and reaction on its pilot episode. The hashtag #iWant2GetherPHEp1, even made it to the 4th spot of the Philippine trends on the same day.

Use the Official Hashtag: #iWant2GetherPHEp1

2gether: The Series, starring Thai heartthrobs Bright Vachirawit (@bbrightvc) and Win Metawin (@winmetawin), is an adaptation of the 2019 Thai novel of the same name and tells the story of Tine Teepakorn and Sarawat Gintithanon, two college boys who entered a fake relationship which later developed into a real one. The unique take on the romantic genre and #BrightWin’s undeniable chemistry to boot captured the hearts and attention of Filipino viewers.

It is also the first Tagalized Thai boy love series to air on iWant streaming service. With this, fans made sure to express their kilig and all-out support on Twitter by using hashtags such as #iWant2GetherPHEp1, and #iWant2GetherPHEp2. Here are the top 2gether-related hashtags in the Philippines in June 2020. 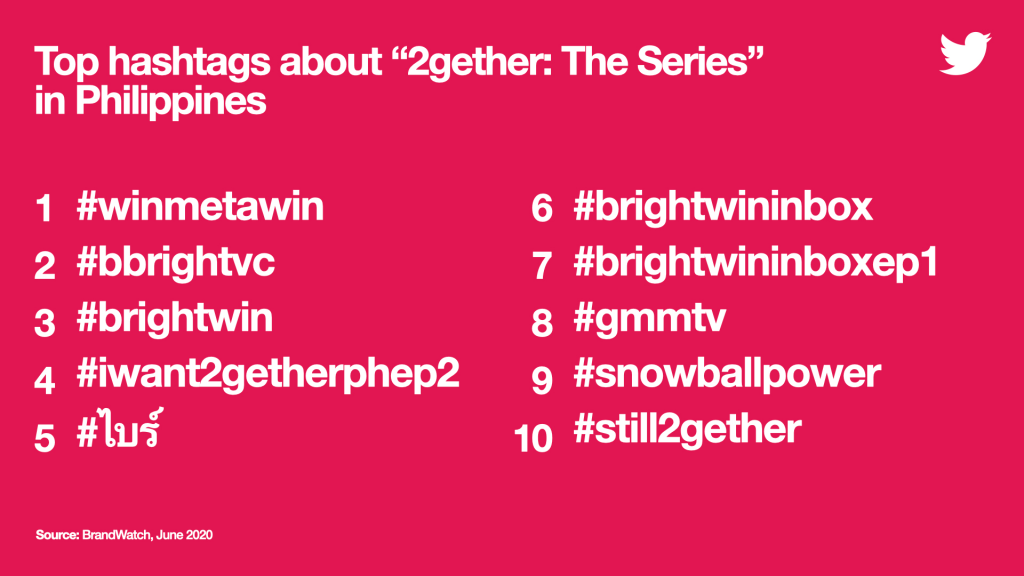 done watching ep 1 and i could say that “nothings change”. they nailed it!! I literally smile and giggle while watching this series before and until today nandito pa din yung kilig. Lets give them a round of applause! 👏🏻❤#iWant2GetherPHEp1 pic.twitter.com/rpg4gOnd4M

Thank you abscbn, iwant, dreamscape, gmmtv, bright and win for this, im crying, it’s as if it was yesterday that the final episode was aired, now it is back, all the emotions that i felt are rushing back to me now , i love this show #iWant2GetherPHEp1 pic.twitter.com/Llj90YRYTV

The dubbing also met with positive reactions from Filipino fans. They openly expressed their satisfaction in seeing the show with a local flavor as Tine and Sarawat converse in Tagalog.

The tagalog version is just as cute and perfect! Good job talaga ABSCBN and everybody else behind this for bringing “2gether The Series” here 🥰@DreamscapePH #iWant2GetherPHEp2 pic.twitter.com/D7tTC7TYka

Prior to the pilot episode, #BrightWin got up close and personal with their Filipino fans in the #BrightWin2GetherLive Mediacon held last June 26. Fans were encouraged to Tweet #AskBrightWin2gether and five best Tweets were selected and answered by no other than the lead stars themselves.

The hashtag #BrightWin2GetherLive also topped the Philippine trends. Everyone was hyped up as Bright and Win mentioned that they would like to visit the pristine waters of Boracay and Cebu and get a taste of Filipino dishes such as adobo and lechon.

Commenting on the success of the livestream event and other local show broadcasts on Twitter, Carl Cheng, Head of Entertainment Partnerships, Southeast Asia & Greater China at Twitter said, “Entertainment is a key vertical for Twitter in the Philippines, and we are glad that despite the pandemic, new shows and programs provide sources of entertainment for Filipinos. We expect that livestream and other video content on Twitter will further boost conversations on the platform and interaction among people as well.”

Never miss an episode of 2gether: The Series on iWant and Tweet your favorite fun and kilig moments from the show along with the hashtag #2getherTheSeriesPH!