by rodmagaru 1 year ago1 year ago
1

IdeaFirst Company is dropping their first episode of GAMEBOYS, a Boyslove (BL) series starring Kokoy De Santos and Elijah Canlas tonight at their official Youtube account. This announcement excites me as we are gonna have something to look forward every Friday. 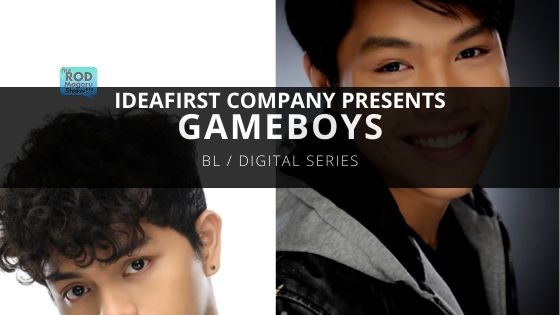 Boys Love (BL) series are popular in Thailand, tackling relationships between flawless, ideal male heartthrobs falling in love. To be honest, I find it hard to believe that in this age in time, very few producers are gambling on creating a story such as this for television. Well, yes we might have series that involves gay-themed subplot but BL is a niche directly telling a story about two main characters falling in love.

I know you guys still have that hangover (myself included) from the recently concluded BL series from GMMTV, 2Gether starring starring Metawin Opas-iamkajorn (Win) and Vachirawit Chiva-aree (Bright). The series recorded its highest episode finale rating of 0.825% last May 15.  it surpassed 50 million views on Line TV, where it garnered the highest number of views for the month of March and 100 million views on April 19, 2020.

Tonight, we’ll see a story from IdeaFirst Company shot during this Pandemic.

Kokoy De Santos, an actor whose recent popular project that’s being talk about is fuccbois,an entry to Cinemalaya 2019 along with Royce Cabrera, a tory of friendship of two guys who love joining bikini open contests who made a mistake which sent them off into a different kind of adventure. He also appeared in iWant’s I am You with Julia Barretto. While Elijah Canlas an actor, known for Sundalong kanin (2014), LSS (2019) and Babae at baril (2019).

Very fortunate to have a conversation today with Perci Intalan through Facebook and I get to ask few questions.

How many episodes do you plan to run this series?

We actually have a long story planned but we wanted to change our production process. Usually we do the whole film (or series), come out with a teaser, then trailer, then release the film or series. But now we didn’t do a teaser or trailer, we decided that the first episode is the teaser/trailer. By going straight to releasing this, we have an opportunity to hear feedback that will guide us as we produce the next episodes.

How did the casting go. Why Kokoy and Elijah?

The key is to have good actors, not just good looking but really good performers. This is trickier because we produced this remotely so there was no one with them when we were filming. That meant that they need to pick up all the instructions from the director and all the lighting, production design, audio adjustments AND be able to perform convincingly. We knew that Kokoy and Elijah are the young actors we can really count on to perform well and also be so professional that they can do this remotely

Do you think there are more freedom in telling a story digitally? I mean in terms of restriction set by MTRCB for TV/Movie

I think every platform is an opportunity to tell a story differently. In the same way that telling a story is different in film compared to TV, we believe that digital has its own advantages and limitations too —and that’s what’s exciting, it’s working around those creatively that makes the end product unique.

A recent film, Love Lockdown produced by Dreamscape Entertainment and now streaming on iWant is also shot during the lockdown. Interestingly, producers are finding a way to provide content despite the limitation production. Here is my review of Love Lockdown (click the photo below)

The series is written by Ash Malanum and directed by Ivan Andrew Payawal. Set the alarm!