To create everyday surprises – more specifically, “O, Wow! Moments,” this is the goal of Oishi, which is why they created Team O.   Team what?  To give you a lowdown, Team O is simply a unique group of individuals from different parts of the media and entertainment industry.  Its members consist of Oishi brand ambassador – Elmo Magalona, Tim Yap, Smart C+ endorser Slater Young, Rock Ed’s Gang Badoy, and Ramon Bautista. A mystery girl is set to join the team at a later date, though Oishi is keeping her as a surprise for now. So how do the members of Team O emphasize the Oishi catchphrase “O, Wow!”? By creating everyday surprises for various audiences.   To date, Team O has rolled out two of those exciting events across the Metro.

Recently, students from Marcelo H. Del Pilar High School were gathered in the Bulacan Sports Complex supposedly for “intramurals.” There was anticipation in the air as the students were told that a celebrity guest would be arriving, but they had no idea who.  Come 2:20pm, the students were surprised when a helicopter appeared from the sky, thundered over the sports grounds, and circled above them.  Excitement filled the entire complex as students shouted with joy and started to run and jump after the helicopter.  Waves of air were accompanied by waves of surprise as the chopper hovered over the gathering crowd and began to shower the students with Oishi O, Wow! Surprise Packs.  It was such a sight to see!  Hundreds of snacks falling from the sky was enough to motivate everyone to draw nearer and grab all the snacks they could. From Potato Fries, to Marty’s Vegetarian Chicharon, to Bread Pan, they didn’t know what they got until they open the Oishi O, Wow! Surprise Packs! 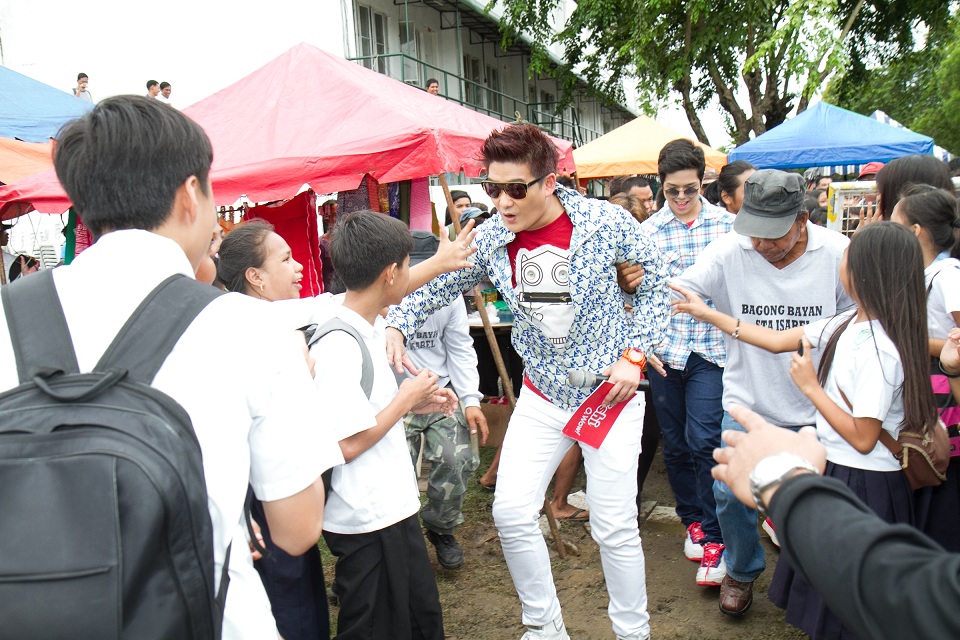 After circling the grounds five times, dropping numerous snacks on its extraordinary mission, the helicopter finally came in for a landing.  With the blades spinning upon touchdown, crowds cheered as Elmo Magalona and fellow Team O member Tim Yap emerged from the chopper.

Both made their way to the stage area for a mini program where different games and activities took place, starting off with Elmo performing his famous dance number, “Teach Me How to Douggie”.  He even sang a duet of “Call Me Maybe” with a lucky girl while Tim kept the crowd engaged.  By the end of the day, thousands of students had fun and over 3,000 Oishi Surprise Packs were given away. It was a thrilling experience for everyone, Oishi and Team O included! Elmo says of the experience, “It was O-some! Let’s do it again! [laughs]”

Stretching the surprise to PUP

And indeed, Team O did it again!  For last August 31, 2012, the campus of Polytechnic University of the Philippines (PUP) Sta. Mesa looked and felt like a typical Friday afternoon. Nothing was going to happen out of the ordinary—or so they thought!– for minutes later, what looked like a typical red pick-up turned out to be the vehicle carrying Team O member, Ramon Bautista.

Ramon came out and rounded up his team of runners in red suits with Oishi O, Wow! Surprise Packs as their main accessory. They were set to run around the campus for students to yank the snacks off their suits. Placed on their marks and readied, they all ran at Ramon’s signal and in no time, the snacks were gone! The runners then lined up for everyone to see the message formed by the letters printed on each of their suits,

“GO TEAM O!”. While all this was happening, Ramon was throwing hilarious side comments, which was a big hit among the PUP students.

As the run came to a close, they parked the red pick-up at a makeshift stage where the runners and their attracted student followers gathered.  Ramon comically teased the students with pickup lines and some volunteered to join in with their own quips. To close the afternoon, Ramon and the red runners danced to the tune of “Macho ka” by Parokya ni Edgar.

Team O has a lot more surprises in line.  The next one set to happen this September and will feature a Team O female member making noise – the good type, with decibels ringing “O, Wow!” every second.  To keep up to date with the latest happenings and hints on the next Team O surprise, like Oishi on  Facebook, visit oishi.ph or follow @oishi_tweets on Twitter.