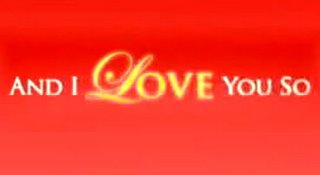 …a love that tells us not to be afraid to fall in love again…and again.

And I Love You So is an upcoming romantic drama starring Derek Ramsay, Sam Milby and Bea Alonzo.

Synopsis: Lara (Bea Alonzo), a preschool teacher and owner, is widowed five months after she married her boyfriend of five years, Oliver (Derek Ramsay). Several months after his death, she meets Chris (Sam Milby), a young man also suffering from the loss of his spouse. They become friends and help each other move on. But as their friendship grows, their unmistakable attraction for each other grows.

This is the 6th Star Cinema movie for this year and surely August payday will make this debut another box office hit.

(add this to your favorite)